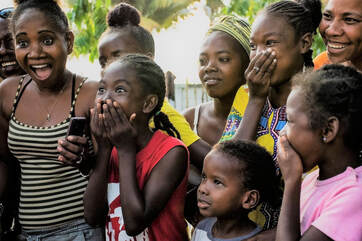 A question I’m sometimes asked is if Action Learning can be used with children and young people. A question behind the question is often whether children have the necessary critical thinking skills, relational skills – and patience – to engage in this type of semi-structured, inquiry-based process. I have to confess that I haven’t tried using Action Learning explicitly with children and young people. The limited research available in this area suggests that little has been done to try this out. I do, however, have some experience in related areas that could offer insight here. I have also seen interesting applications of some dimensions of Action Learning that can be useful to draw on too.

Many if not most young children appear to be endowed with natural curiosity. Parents of toddlers sometimes complain about being bombarded with an unending list of ‘Why?’ questions. ‘Why this?’ ‘Why that?’ I remember my 5 year-old daughter once asking me: ‘Dad, why is it hot upstairs, and cold downstairs?’ I responded simply (whilst gesturing a floating upwards motion with my hands): ‘Because when the air gets hot, it rises.’ She responded immediately: ‘Yes, but why does it rise?’ Now that’s curiosity. She wasn’t willing to take things at face value and was willing to dig deeper. A question that educationalists struggle with is how to sustain that spirit as children get older.

When that same daughter was 9 years old, I had been offered two job options, both of which would entail a change of role in an organisation that I loved. I wasn’t sure what to do. I mentioned this to her and asked if she had any words of wisdom that could help me to decide. She asked for a few minutes to think about it and to write down some questions. When she spoke again, these were her questions: ‘1. Can you handle it? 2. Do you want to try something new? 3. Do you want more or less work? 4. How much change do you want in your role? 5. Would it require lots of work at home? 6. Do you have enough time to concentrate on it? 7. Do you want your life to be filled with work?’

That settles the question, for me, as to whether young people are capable of critical thinking. In November last year, I was invited to lead some classes in a Montessori school in Germany. It was a novelty for them to meet someone from the UK so I asked them what questions they would be curious to ask. One 14 year-old responded, ‘Is the petrol price so high in Germany now because of Brexit?’ I invited them to play with further questions to explore that issue, e.g. ‘Is the price rise only in Germany?’ ‘What is the German media’s view of Brexit?’ It opened a lively dialogue in which they concluded that media stories tend to be a combination of information, propaganda and drama.

Similar methods of posing questions and enabling children and young people to formulate their own questions have been pioneered in approaches such as P4C (Philosophy for Children) and, in a faith-based context, Godly Play. They specialise in enabling critical reflection within groups, as well as in developing skills in reflective, constructive dialogue. They meet repeatedly over a period of time so that the young people involved can practice and grow in these abilities as they go along. They also aim to ground the conversations in everyday issues and realities that interest or are of concern to participants, rather than in vague abstractions that could leave the children disengaged or bored.
​
We can see from these examples how developing critical thinking skills holds a lot in common with Action Learning. Action Learning is, however: (a) typically person-centred and work-orientated and (b) explicitly solutions-focused and action-orientated. To achieve transformational impact, Action Learning calls for careful group contracting around focus and boundaries, and trust-building so that participants don’t feel too vulnerable or over-exposed. My view is that Action Learning with children and young people would need to be considered only by experienced pedagogic professionals such as teachers or youth workers, and within a broader relevant safeguarding ethos and framework.