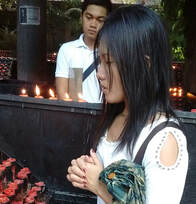 She stood up with difficulty but without complaining. This elderly woman lives on the pavement, at the roadside, and tries to eek out a living by selling candles to passers-by on their way to church. She reminded me of The Little Match Girl in the Danish fable. As Jasmin approached, this woman beckoned to her with a smile, inviting her to buy a candle. Her arched stoop and gingerly movement suggested she was in pain, Jasmin thought, but with no access to medical care.

Jasmin stopped and spoke with her. ‘Lola, how old are you?’ In the Philippines, like in many of the poorer countries in the world - and unlike in many wealthier countries - increase in age brings increase in respect. ‘I don’t know’, she replied. ‘The last birthday I can remember was when I was 34.’ I found myself wondering, silently, what happened when she was 34. Jasmin responded, ‘And here you are, still working hard to make a living under the heat of the sun.’

‘Would you like to buy a candle?’ the woman asked. The tone in her voice suggested that she was bracing herself for disappointment, that same disappointment she had felt day after day, year after year, on so many occasions. After all, there were other people selling candles too, so what hope did she have? ‘How much for a candle?’, Jasmin asked. ‘2 pesos’, she replied. Jasmin said, ‘I will take 10 candles’, then, as if secretly, slipped a 500 pesos note into the woman’s hand.

‘But I don’t have any change for such a large amount’, the woman said. ‘How about you keep the candles and pay me next time you pass by, when you have some smaller change?’ Jasmin replied softly, ‘Lola, this is a gift to you from Jesus. Please accept it as a gift from Him.’ At that, the woman threw her arms around Jasmin’s neck, burst into tears, and cried, ‘Maam, thank you for helping me!!’ Jasmin hugged her back and whispered gently, ‘Pray and say thank you to Jesus.’

Afterwards, I asked Jasmin what had just happened here. Tears welled up in her eyes too. ‘I remember selling candles as a child, how hard it was. I wasn’t good with maths and so, if I made a mistake when giving people change, I had to pay it back out of my own tiny earnings. I know what it is to be poor.’ So, I asked specifically about this woman, this one person, this stranger. Jasmin replied, ‘At least, for one day in her life, she knows how it feels to be loved, to be blessed by God.’
​
I fell silent. All I could see were images of Jesus, touching the lives of the poor and most vulnerable in the world: ‘I have come to bring good news to the poor.’ He’s still doing it now.