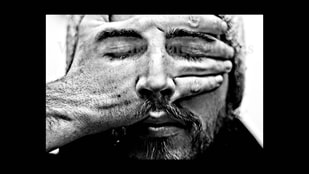 How can we use coaching to shift a perspective, to deepen a stance? Take, for instance, narrative. A topical theme. Differing narratives surrounding the Corona-drama represent profoundly contrasting perspectives and lived experiences. Unquestioned, unquestioning and worlds apart. I see and hear people in the wealthier countries panicking about daily infection rates and death tolls; fixated on sense of personal risk, dream lives threatened, shops empty of toilet rolls and the as-if brutal inconvenience of staying at home to relax, enjoy the sunshine, do some gardening etc.

The picture painted by the UK media is one of global crisis; things never having been this bad, the world coming to an end, things never being the same again. It’s a picture that all too often emerges from the comfort of an armchair, a fridge well-stocked with food, a car on the drive, money in the bank if needed. It provokes deep fear, uncertainty, insecurity; spiritual and existential. We aren’t used to feeling this level of threat, of powerlessness, of out-of-control-ness. Religious preachers talk apocalyptically, as if this is the end. It comes across as so pious, so blind, so painfully self-indulgent.

Shift now to the perspectives of the poor; that majority of the world’s population who live every day on the edge, scraping hard to eek out an existence, living with the continual threat of sickness, starvation and death. Nothing to fall back on but faith, family, friends and neighbours. Here’s a desperately poor woman in the Philippines. She lives on next-to-nothing with her 3 children in a boarding house in a ‘slum’. They’re on lockdown, not allowed outside, in steaming hot rooms with no aircon. They have very little food and no access to the bank to collect what’s left there, to live.

They didn’t have money to panic-buy, to stockpile when the Covid19 threat became clear. The wealthy minority did, and that pushed up the prices of what was left. The poor got poorer. They live hand-to-mouth, day-to-day, and the risk of starvation is greater than the risk of disease. One son is allowed out once a week to buy food at the local market. He carries a pass, passes through numerous checkpoints, spends five hours queueing for a bag of rice and a handful of vegetables. He worries when he gets home that he may pass on the virus to his family. No sanitation. No shower to rinse off 'the smell of the sun'.

You see, the water supply has gone off too. People crowd around a creaking water pump at the centre of the community to carry whatever water they can to their homes in buckets. They can’t drink it, but at least they can wash themselves, briefly, and their clothes. It gives light relief from the heat. The electric power fluctuates. On, off; sometimes, irregular. The internet connection went off too and the repair staff didn’t want to risk coming out to fix it. The crowded conditions make social distancing near-impossible. People are afraid everywhere of what they might catch, or spread.

The government says it is distributing food supplies to the poor, but it hardly ever arrives. Local officials steal the food and pass it to their own families first. Corruption is rife and the poor have no power to address it. Relief supplies are sold off by unscrupulous people to the highest bidders – the rich. In the capital, the poor came out onto the street to protest. They were starving. The President ordered the police and military to open fire on them if they didn’t return to their homes. With no end to the lockdown in sight, the poor must sit…and wait…and pray…and survive if they can.

So back to this woman. She knows what it is to be poor. It’s her normal life experience. The grinding pain of poverty is relentless; it never ends. She shares the little she has with her neighbours who have even less. “How could I eat while they have nothing to eat?” She’s adamant to follow Jesus, whatever the personal cost may be. She doesn’t know where her next meal will come from. If she or her children get sick, they have no access to doctors, hospitals or medicine. It’s all there but too expensive, so out of reach. She prays, reaches out to Jesus and is determined to trust him.

How can we shift a perspective, deepen a stance? Look to the poor.

'Your words make my heart thud, Nick. I feel as though you are shouting and crying at the same time.' (Stella Goddard)

'Thank you for this glimpse into the world. Thank you that you always lead our gaze to people and places beyond ourselves.' (Kathrin Hoffmann)

'Thanks Nick. Huge resonance for me. The way you write enables people to see things from another perspective.' (Rick James)

'Thank you for sharing this article, Nick. Very profound. It felt like walking through the slum areas I've visited.' (Simona Costea)

'I have stood and worked in the heart of the slums in Liari, Karachi, and I can confirm, these are the unknown people.' (Lisa Cherry)

'Great article. I love your style of writing and how you get the emotional connection through your observations.' (Pav Ponnoosami)

'Wow, Nick...that brought tears to my eyes. Thank you so much for sharing.' (Donna Read)

'Great article, Nick. It puts things in perspective. I felt similarly when watching news of the poor in India. Very distressing. (Felicity O'Hanlon)

'Thank you for this article, Nick. So accurate! It's as if you are here in the heart of my beloved country, the Philippines.' (Paul John P. Dela Serna)

'Good article, Nick. I wonder if history will record that millions of the poor had to die, to protect the rich from a virus.' (Steve Travis)