Crab to dolphin
Experiments in Gestalt 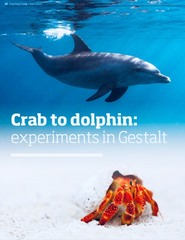 Anna looked broken on the computer screen, her tired tearful eyes betraying a sense of hopelessness and strain as she hunched awkwardly across the desk. It had been a tough week, a hard meeting with her line-manager and the CEO in the same room at the same time. It had left her feeling stressed, hurt and frustrated. Deeper, what had happened that Monday had been a culmination of earlier encounters, of previous experiences, that now resonated, reverberated and amplified all too painfully in her heart, mind and body. She felt marginalised, disempowered and unheard.

It wasn’t the first time she had been here. Each time she travelled around that awful, recurring, psychodynamic loop, it felt more hope-sapping, more wearying and more bruising. She was starting to wonder whether she should be looking for a new job elsewhere. At last, she half-looked up at me and spoke: ‘When things are out of control, people feel overwhelmed.’ Abstract. Generic. People. ‘How are you feeling now, as you say that?’, I responded. Anna gestured downwards with her hand and replied with an intense look, ‘Like crawling under the desk, into a ball.’

‘Is that how you felt in the meeting too?’, I enquired. ‘Yes’, she said, ‘I backed off.’ ‘You backed off’, I reflected back, slowly. ‘Yes', she replied ‘That’s what I always do.’ ‘A question', I asked, ‘Would you be willing to try an experiment?’ ‘Yes’, she replied, now looking at me puzzled. ‘If you were to back off now – physically – what would that look like? Have a go. Do it – literally.’ Anna looked thoughtful then wheeled her chair back away from the screen into the far corner of the room. ‘Can you still see yourself on screen from there?’ I asked. ‘Yes’, she replied.

‘What do you notice when you see yourself from there?’, I asked. ‘I look very small, as if I have shrunk!’, she replied. ‘And how do you imagine you look on my screen now?’, I asked. ‘Tiny’, she said. ‘And now, as you move towards me again, what do you notice?’ She shuffled her chair forward, back to the desk. ‘I get a lot bigger’, she said, now half-smiling. ‘In your meeting, you backed off. What are you aware of, here and now?’ It was a light bulb moment. ‘When I disengage from a conversation, I make myself smaller in others’ eyes and in my own. I diminish myself.’

‘What image comes to mind as you imagine yourself in such meetings?’, I asked. She immediately said, ‘A crab. I hide in my shell but I still have a claw that can nip at others, if needed.’ She laughed. ‘And if you imagine yourself as a crab, here and now?’, I asked. ‘The same feeling as before, like hiding under the desk and curling up to protect myself, to feel safer’, she said. ‘So what, for you, is the opposite to a crab?’, I asked. Anna responded quickly and instinctively, ‘A dolphin.’ ‘Are you willing to try another experiment?’, I asked. ‘OK’, Anna replied curiously, ‘let’s do it.’

‘If you were to be a dolphin, here and now – what would it look like. Give it a go. Do it.’ Anna stood up from her chair and moved around the room, looking flowing and quite balletic. ‘How do you feel as a dolphin?’, I inquired. ‘Free, flexible, agile, able to move – and happy.’ Anna looked so much more relaxed as she returned to her seat, now sitting upright and smiling. The look of strain had vanished from her face and body. I commented on what I saw. ‘You look like an entirely different person to the one who arrived here 20 minutes ago.’ She replied, ‘Yes, I feel it too.’

‘So, how would it be if you entered the next meeting as a dolphin?’, I asked. Anna’s face brightened. ‘I would feel far more relaxed, less fearful, less need to control things, more creative, more willing to engage.’ ‘And how might that influence how others perceive, experience and respond to you?’, I asked. ‘As more positive, more responsive, more engaged’, she said. She was joining dots now. How far was she inadvertently contributing to what she was experiencing from others? ‘Do you know now what you need to do?’, I asked. ‘Yes’, Anna replied. She smiled as she turned off Skype.


(This article appeared in the April 2019 issue of Coaching Today, which is published by the British Association of Counselling and Psychotherapy © BACP)