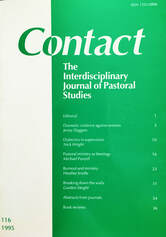 Wright, N. (1995) ‘Dialectics in Supervision: An Exploration of the Relationship & Interface between Intra-Personal, Inter-Personal and Contextual Dynamics in Supervision’, Contact, Issue 116, pp10-15.

At the time of writing (1995), I am employed as Social Care & Training Manager by a Christian social care organisation.  The fact that I am a Christian and that the organisation works from an evangelical base within a largely non-Christian constituency means that some of the aims, values and parameters of my work are influenced and, at times, pre-determined by that context.  The work of the organisation, similarly, leaves its mark on the communities within which it operates at both individual and corporate levels.  There is a ‘dialectical’ principle at work here.

My particular role involves developing a variety of social care initiatives through consultancy, supervision and training.  I am also responsible for managing a number of residential social care projects.  My work could be, therefore, described in terms of a combination of managerial and non-managerial tasks.

My own supervision of staff operates from within a theoretical framework of ‘dialectical’ principles which I will attempt to outline in this paper.  The models included describe the supervisee, supervisor and context of a supervisory relationship.  They could be, of course, widened to include client or client group as well as more macro elements (e.g. community) to illustrate parallel processes etc. but I trust that, for simplicity’s sake, the parties included will suffice for the purposes of this article.  The notes below attempt to explain the various facets of those models.

In order to apply this model more widely, it is helpful to bear in mind that the underlying principles described apply to groups, organisations, communities and nations in essentially the same way that they apply to individual persons.
The ‘inner self’ and ‘context’ are, in a real person, inseparable since no person exists in a contextual vacuum.  The dialectical nature of this relationship means that, over time, the person’s inner and outer worlds interact continually and the person is said to ‘develop’.  It is apparent that the nature and degree of change in the inner self is not determined by the context but that it is, nevertheless, influenced by it.

A change in one dimension of a person’s experience is likely to effect change in the others.  This change might be (a) internal (in how the situation is perceived and experienced by the individual) or (b) external (in subsequent change of circumstances).  For example, a change in an unemployed person’s theological views may influence his/her politics (and vice versa) and a subsequent change in either of these areas may well influence how he/she experiences and responds to his/her situation.

This helps to explain why people experience, interpret and respond to similar situations quite differently.  An individual may respond to similar situations differently at different times in his/her own life for this same reason.  It follows that the more significant a change is experienced in one dimension, the more significant the corresponding effect is likely to be in at least some of the other dimensions.

The supervisor and supervises meet in dialectical relationship to one-another.  Their interaction is a bringing together of two individuals, each bearing the marks of his/her own present and historical experience.  This interaction will bring about change in both parties, albeit in different ways and to different degrees.

The fact that each approaches this interaction from a specific (and different) experience-base means that the potential for communication breakdown and subsequent conflict is very real.  An analysis of linguistics helps to explain how this might occur.  For instance, I imagine that there will be some reading this article for whom the word ‘dialectics’ produces feelings of uneasiness and resistance, possibly because of its associations with Marxism in recent history.  In attempting to communicate this model, therefore, I need to consider not only what the word may mean ‘objectively’ but also what meaning it may carry for particular readers.

Another key area requiring examination is that of culture.  Or example, addressing questions of ‘strengths and weaknesses’ in a staff appraisal or interview context may cause some people of an Asian/African background whose cultural tradition may either inhibit their response or cause difficulty in interpreting the question from within a Western European framework.  There is serious potential here for inadvertently discriminating against people from a different cultural background.

In my own supervisory work I encountered a situation in which an African worker was reluctant to tackle his manager over an issue that was bothering him.  I initially assumed (from within my own cultural framework) that this issue was one of avoiding conflict but subsequently discovered that the worker in question came from a cultural and theological background which dictated that those in authority should not be challenged.

The question this raises is how to avoid a subtle form of cultural imperialism in supervision.  In other words, how do I, as supervisor, avoid inappropriately imposing my own cultural framework onto that of the supervisee?  This particular incident was resolved through exploring with the supervisee ways in which he had learned to work (either personally or by observation) through similar situations in the past without violating the principles enshrined within his own culture.

This example illustrates how the supervisor (in this case, the worker’s manager) brings to the relationship the added dimension of structural power, i.e. power by virtue of his/her position/role vis a vis the supervisee.  The supervisee brings a corresponding and relative structural powerlessness.  This is particularly the case when the supervisor, as in this instance, carries managerial or other hierarchical authority over the supervisee.  There may be, however, other power dynamics (on the grounds of race or gender, for instance) which are less obvious but equally potent and worthy of equal consideration.

One way of working through this problem is to explore explicitly the nature of the supervisory relationship, including power dynamics, with the supervisee in an initial meeting when the purpose and content of subsequent supervision is negotiated.  This helps to break the sense of uneasiness that can arise when both parties recognise the power implicit in their relationship but neither addresses it, or its implications, openly.

In most cases, the interaction of supervisor and supervisee takes place within a wider context; for instance, that of the organisation of which they are both a part.  The organisation imposes its own ‘dimensions’ on its workers as well as being influenced by those workers.  In view of this, the organisation and workforce could also be described as living in dialectical relationship to one-another.

The way in which an organisation is personified so that it takes on a metaphorical life of its own with its own values, structures and policies explains how injustice in a system (such as discriminatory practice) is sometimes described as ‘structural sin’.  Identifying ways in which this dimension impinges on what takes place in supervision (and vice versa) is a principal concern of the field of organisation development (OD).

The organisation itself exists within a wider context including a local community, nation-state and inter-national community which, once again, both influence what happens inside the organisation and which are, at the same time, influenced to varying degrees by its activity.

This theoretical framework draws together insights from disciplines including counselling and community work in such a way that intra-personal, interpersonal, organisational and community dynamics are linked in terms of origin, influence and on-going change.  I have found this model particularly helpful in understanding conflict in supervision as well as bridging the gap between individual and social-political approaches to working with people.