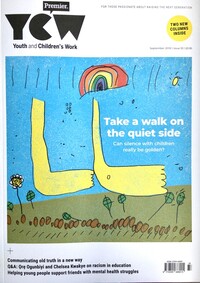 Working with neo-Nazi teenagers in Germany, not long after the Wall came down, was a sobering experience. With the rise of the far right and other extremist groups today in the UK and beyond, there are stark lessons we can and should learn – and quickly.

Seeing young people dressed in full-length black leather coats and boots, strutting arrogantly, shouting racist slogans and making blatant Nazi salutes made my blood run cold. I had to shake myself to snap WW2 TV images of Nuremberg rallies out of my mind­, to remind myself I was there to bring Jesus, to show his love.

The goal of this Christian CVJM (YMCA in Germany) project was to influence the beliefs, values, attitudes and behaviours of these young people, particularly in relation to local immigrant youth. We did this by spending time and building personal relationships with them, hearing and responding to their issues, concerns and frustrations as well as we could. The tricky part was to avoid being misunderstood and misrepresented by other local people as colluding with the very young people we were trying to change.

Unemployment in the region was running high, as were inter-community tensions. A national far-right party was planning to hold a political rally in the town and Christians were struggling to know how to take a strong public stance against this whilst, at the same time, to exert authentic, relational influence.

I had worked previously in detached youth work with street gangs in the UK, particularly at night, with bored teenage gangs who were self-confessedly creating trouble on council housing estates and harassing local residents. This helped prepare me for what I was now facing in Germany.

I’m from the UK, but I spent two to four weeks in Germany each year to support and learn from a radical Christian social worker friend there. I spoke basic German and the youths were cautiously intrigued by this strange foreigner. The new dimension for me was working with groups that united around an explicit social-political belief system and identified with other groups that shared those same beliefs.

The first thing that struck me is how many of the people in this neo-Nazi youth group came from backgrounds characterised by unhappy and dysfunctional relationships. Against this backdrop, the group functioned as a substitute family: a relational unit that fulfilled a deep social-psychological need to belong. For young people who feel lost, alone and isolated in the world, the emotional security such groups can provide is a powerful motivating factor to join and stay.

The second thing that struck me is the simplistic nature of the far-right ideology. Most of the young people in the group had struggled in the formal education system. They felt insecure, perplexed and confused by the complex world, situations and relationships in which they found themselves. They yearned for simplicity – for something or someone that would bring clarity. Their adopted ideology fulfilled an intense longing to make sense of their world and their lives.

The third thing that struck me was the group’s overt sense of mission. Its belief system provided members with a vision, a galvanising purpose, a shared endeavour in their lives and a deep sense that they could influence and do something important in the world. In a socio-political context where so many young people felt marginalised and disenfranchised, it fulfilled a deep need to believe they could make a difference, take back control, feel less out-of-control and find hope.

I’m aware that I’m presenting here a tidy distillation of my own reflections on this experience. We might well ask, “What on earth were these young people thinking?”, especially when the ideologies and groups they identified with are so pathologically extreme. I can only surmise that they were not driven primarily by thinking, but by an overwhelming feeling. If we don’t meet similar young people now, at their point of need, others will do so – and the results could be disastrous.

So, if you work with young people today, what can we draw from this situation to help inform our own thinking and practice? How far do spiritual, existential and social-psychological needs for belonging, sense-making and making a difference feature as a focus in our work?

If our work is informed by Christian beliefs and values, how well do we communicate, model and engage young people authentically with the gospel of Jesus Christ? Are we upholding his invitation to radical relationship, his radical revelation of truth and his call to radical purpose?

​Our imperative is now: Pray. Reach out. Act.

Nick Wright is a psychological coach and a former youth and community work trainer for the Shaftesbury Society. www.nick-wright.com