Ripple effects
An encounter with a seagull 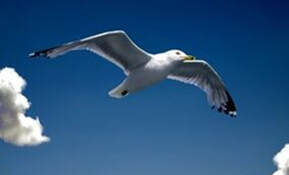 Wright, N. (2019), 'Ripple Effects - An Encounter with a Seagull' [An Interview with Nick Wright], University of the Third Age, Northallerton, England, 9 October.

Isn’t it interesting how, often, we can look back and trace patterns through our lives? What may have seemed like fairly unimportant experiences at the time could turn out, in retrospect, to have been pivotal.

It’s only as we look back with eyes wide open that we’re able to discern the ripple effects, the consequences, the what-happened-next moments that have shaped our personal and professional stories.

Our speaker on 9 October 2019 is Nick Wright, a person who has worked in 14 countries to date with charities and international NGOs.

An encounter with a seagull at age 17 triggered a chain reaction of decisions, experiences and events that led Nick to a remote jungle village in the Philippines some 40 years later.

Come along to hear Nick’s story including some of the people, influences and weird stuff on route!

​We all have a story.

As we look back over our lives, some people, events and experiences really stand out. Everything else fades out of memory, as if into an invisible backdrop.

We subconsciously draw lines between those things that stand out to us, like dot-to-dot, and the picture that emerges becomes, for us, our life story.

Today, I’m going to share some people, events and experiences that stand out to me in my life story. It’s not the whole story. It’s a series of glimpses into my story.

As I do so, you may want to reflect on some of the people, events and experiences that stand out in your own story too.
​Jungle

This is me, in the Philippines, about to enter a jungle village and to meet these amazing children. It's the first time they have seen a foreigner and they, like, me, are bursting with excitement:

But my story doesn't begin there.

I was 17, in a job that I was terrible at, and that I found tedious. Someone gave me a copy of Jonathan Livingstone Seagull. Has anyone here read it?

I got involved in trade union politics. It got me into trouble with my bosses and the trade union. That didn’t deter me. I was a fired-up teenager on a mission to change things.

At 21, a lad challenged me to a fight. He was into boxing, I was into karate. I won. He was shocked, but had the humility to shake hands. We became best friends.

This lad found God. I thought I knew God, but I discovered I didn’t. In time, Jesus found me too. He set my mind, body and soul ablaze with dazzling light.

That, for me, changed everything. My sense of purpose now had a focus, a direction. I was determined to make a difference in the lives of the poorest and most vulnerable people.

I resigned from my job in industry, 3 months before my polytechnic finals, and moved to London as a volunteer in a community development project.

It was in the ‘Socialist Republic of Islington’. I lived next to the town hall which had a red flag, a CND flag and an Islington flag. I loved it. It felt alive, radical, real.

I worked with isolated elderly people, young single parents, latch-key kids, and street gangs at night. They struggled to understand my accent. I didn’t understand their slang.

I got rid of all my possessions, apart from what I could carry in a bag. I wanted to identify experientially with the world’s poorest people. I slept on the floor in a hostel.

I met a radical anti-Nazi activist from Germany. We became good friends and I worked with him in social work projects in Germany, 2-4 weeks per year, for the next 10 years.

I also got involved in human rights work for El Salvador, hitch-hiking around the UK to inspire and support local activist groups. It was heart-breaking work. It was hard to sustain hope.

I had a serious motorcycle accident and the insurance finally came through. I bought a rucksack, carry-mat and sleeping bag and set off into Europe to see what was ‘out there’.

I ended up volunteering in a Palestinian hospital for people with disabilities on the West Bank. The conditions were terrible and, after a few weeks, I became very ill.

The flight home cost exactly the same as the money I had left in my bank account.

I returned to the North of England. I got involved in youth and community work with a church in Middlesbrough and also ran a latch-key club for single parents and their kids.

It was hard to return. My experiences in the South and abroad had changed me. It felt hard to fit in again. A poor family in the town centre ‘adopted’ me, helped me to settle.

I felt myself gravitating towards people from other countries. I became good friends with some Pakistani people who welcomed me into their world. It felt like a privilege.

I was offered a job in London again, supporting long-term unemployed people. I leapt at it, loved it. I rented a room in a shared house with other Christian activists. I felt alive.

People kept asking me if I had considered Christian ‘ministry’. I said no. However, I was curious and found a degree course in theology that majored in philosophy. I applied and got a place.

I trained as a Baptist minister and focused my studies on Jesus and the poor, especially questions around why people suffer. However, I really struggled with being a ‘church minister’.

I was offered a job as a social activism consultant for a national organisation, the Shaftesbury Society. I leapt at it. I felt like I had returned home.

I got married to a nurse who had worked in Sudan. We had two daughters and tried to live a simple lifestyle, supporting human rights and community development work together.

I also did a masters’ degree in organisational psychology. I loved it. It helped me apply ideas from community development into leadership and organisations.

Later, I was invited to work for a Christian international development and relief organisation, Tearfund. It was an amazing experience. I felt as if I had died and gone to heaven!

Later still, I was invited to work for a global Christian relief and development organisation, World Vision. It gave me chance to work in countries all over the world.

During that time, I did a postgrad in coaching psychology. This course, too, was like a dream come true. It has helped me to support people and teams in lots of different countries.

However, it wasn’t all rosy. I crashed my bike at a Sports Relief charity event and snapped my knee sideways. It took a year to learn to walk again.

Alongside this, one of my daughters started to struggle with mental health problems. My wife left and took my daughters with her. I lost my family and my home.

I started to experience periodic episodes of terrible pain, then collapsing unconscious. I was taken to hospital and given a CT scan with radioactive dye. The dye provoked an anaphylactic reaction and I almost died.

A Christian biker group I belong to was a great support. Family, friends and work colleagues helped me too. Light in darkness.

At the same time, my work was taking me further away from the grass roots. I spent more time working with leaders. I felt something, deeply, missing.

So I took a break from my work to do 2 courses in Teaching English for Speakers of Other Languages. I loved it. I had taught English before but now I had proper training to do it well.

An Christian activist contacted me from the Philippines. She’s from the poorest of the poor. She grew up in a small wooden hut on a jungle mountainside. She invited me to visit her community.

​She’s like a cross between Mother Theresa and Che Guevara. She inspires me and scares me. It's through her that I arrived in that jungle village in the Philippines.

So, back to those early days. A job that felt meaningless. A man that gave me a copy of Jonathan Livingstone Seagull. A lad that asked me for a fight. A life-changing encounter with Jesus.

Here I am back in the North East. Today, in Northallerton. That’s something of my story. How I’m here today. Thank you for your patient listening. Any questions?