Strike a pose, take a stance 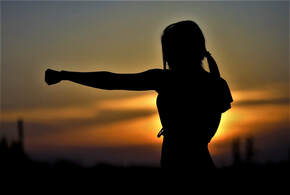 ​‘What are you looking at? Strike a pose.’ (Madonna)

Madonna’s musical masterpiece opened the 90s with classic escapism, a subcultural call to discover a freedom, in art, that had evaded people in the midst of blistering life struggles in the real world. To dance, and to pose, felt like a light and life-giving relief. In coaching, we sometimes use physical posture, gesture and movement too. Take, for instance, a Gestalt coaching workshop I once took part in, led by Jenny Stacey (co-author of Counselling Skills for Creative Arts Therapists, 2001).

One activity: three colleagues were asked to stand with me. I was then invited, physically, to depict my past self, my current self and my future self with each colleague mirroring, physically, one of those three postures in front of me. As I looked at them standing silently in front of me in role, it was as if they were depicting my life story set in stone. I was then invited to depict the future self I aspired to most and to notice how it felt to do that. It was a profoundly impactful experience.

Another example: I worked with a Gestalt coach, Brian Watts (Karis), and spoke of a forthcoming presentation that I felt nervous about. Instead of discussing the issue, he invited me to leave the room, then to re-enter as if I was facing the group I was due to present to. I did so and, as I now stood in front of him, he commented that my hand was on my chest as if covering my heart. ‘How would it be if you were to reveal your heart?’ That simple insight proved, for me, transformational.

Since those earlier days, I have incorporated physical movement into much of my own coaching, training and facilitation practice. (For examples, see: Just do it; Crab to Dolphin; Let’s Get Physical in the free e-resources section on my website). I’m also reflecting on the notion of posture as stance. In contrast to posing as a way of escaping reality or drawing attention to oneself; stance is about a far deeper spiritual-existential decision and direction and the actions that flow from it.

I flash back to my martial arts days as a teenager. Stance meant posture and different postures enabled power, movement, mobility or stability. ‘Powerful, fast, accurate, and smoothly executed techniques can be performed only from a strong and stable base’ (Dunham Martial Arts). Whereas many coaches strive for neutrality vis a vis the agenda and choices of a client, the notion of stance raises ethical clarity, courage and consistency into the frame. ‘What’s my base? Where do I stand?’

I worked as a life coach in a project with neo-Nazi young people. What does neutrality mean in that context? One of their goals was to be more effective at harassing local migrants. Could I wash my hands of responsibility if my coaching had enabled them to be more successful at it? Not at all. Yet some of the agendas that clients bring to coaching have implicit ethical, relational, cultural or systemic effects that lay out of view, and coaches are often very unwilling to raise or address them.

So herein lies a challenge: how to take a conscious and deliberate stance without inappropriately imposing our own agendas onto a client? How to be true to our own values, to be willing to ‘go there’ and challenge in difficult territory, without compromising our coaching role by doing so? I’m sometimes asked how being a follower of Jesus influences my coaching. Would it be congruent to say 'It doesn’t'? No. Be real. Neutrality is a myth. Hold onto your ethics and values. Strike a pose, take a stance.